Surface waters of the Polistovsky Reserve are represented by rivers, lakes and an extensive marshland area. The largest rivers are Lovat and Polist, in the interfluve of which the territory of the Reserve lies. The Lovov river is in some places porous, the banks rise to 11 m, the channel width is 35-140 m, the depth is 0.2-1 m on rifts and rapids, and 1.5-2.5 m on riversides (maximum 4.3 m). Current velocity of the river Polist is 0.1-0.3 m/s, river width up to 20 m, depth 0.3-2 m. Due to the flat terrain of the Polistovsky Reserve and the lack of channels, the drainage role of the rivers is insignificant. By their regime the rivers of the area belong to the East European type with predominantly snow feeding. All the rivers are characterized by spring flooding at the end of March - first half of April, in autumn the water level slowly rises due to rains. The height of the autumn flood is generally lower than the spring flood. The autumn rise in level continues until the first ice formations on the river. On the heavily waterlogged rivers of the Polistovsky Reserve (Redya, Polist) the summer-autumn runoff is usually high and amounts to 30-39% of the annual runoff. All rivers have low banks and winding channels. 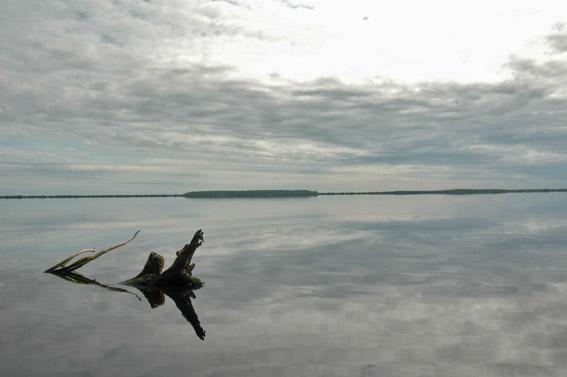 - open rivers (with an open channel);

- The "sub-moss" or "deaf" rivers flowing under the moss cover.

Rivers rarely retain the same morphological character throughout their entire length. They are much more often a combination of different types of channels, and it is not uncommon for sections of different ages to alternate. Thus, bog streams are complex rivers.

Lakes. In the Polistovo-Lovatsky massif there are up to 20 large lakes. Within the Polistovsky Reserve all the lakes are located in groups. The northern group consisting of three lakes - Russkoe, the second largest (390 ha), Mezhnitskoe and Kokorevskoe - is located within the Polistovsky Reserve. Lakes of the Polistovo-Lovatskaya massif, as well as moss swamp lakes in general, belong to the group of para-oligotrophic reservoirs (Bogdanovskaya-Gienief, 1969); they are characterized by water poverty of calcium and high content of humic substances. In most cases lakes are located in depressions of the surface, reflecting depressions of the bottom (Russkoe, Mezhnitskoe, southern group of lakes). The depth of the depressions is up to 1.5-2 m (Lake Russkoe). In more rare cases, the shores of the lakes are flat (as in the Lake Kokorevsky). The stratigraphy of lake sediments of the Polistovsky Reserve is often different. The water depth varies between 1 and 2.5 m, increasing near the eastern shores. The humus sapropel forms a false bottom. Under this deposit there is usually a layer of fine-detrital sapropel (0.25 to 0.6 m thick). Below it is clayey sapropel, it is absent in Lake Russkoe, and in other lakes the thickness of clayey sapropel is from 0.2 to 0.7 m. Lakes are of great importance as water receptors. Their draining influence has a noticeable effect on the surrounding parts of the bog. Parallel to the banks of some lakes there are peculiar, long, sometimes winding lakes, or potholes-lakes. The depth of water in them is up to 2.5-3 m.

A peculiarity of the bog lakes of the Polistovsky Reserve, which is probably a consequence of their feeding mainly by groundwater of the peatland, we should consider the constancy of the water level in them during the year. In Lake Russkoe, the water is only 20-25 cm below the shores in summer; in other lakes, the height of the shores above the water edge at the same time of the year is 30-40 cm. In the lakes of the southern group, in contrast to the northern group, along with erosion of the shores, overgrowth in shallow bays, especially on the western side (pondweed, yellow mussel) is also observed. 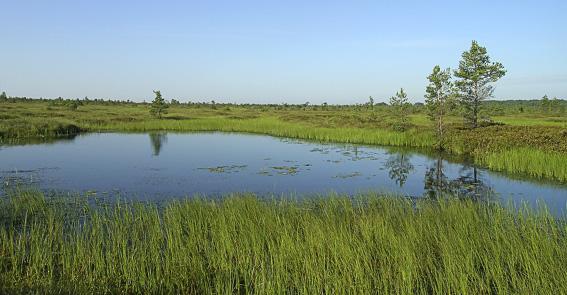 Small Lakes. In the Polistovo-Lovatsky massif, there are many lakes scattered among the moss cover, but they are distributed very unevenly: in some parts of the massif they are completely absent, while in others they constitute a very characteristic and significant part of the landscape. According to their origin, this small lakes can be divided into two main groups: primary (residual), remnants of former lakes or watercourses, and secondary, formed in the process of peatland development. There are transitions between these two groups: some lakes are remnants of rivers flowing on the peat bed, others, being primary, have limnic peat deposits.

Groundwaters of the Polistovsky Reserve are represented by intra-soil water in the peat column: buried water bodies, water intrusions, water veins and interlayers. According to hydrochemical characteristics, all water bodies and streams of the Polistovo-Lovatskaya bog system can be considered as polyhumous, soft-water with acidic reaction of the environment, poor in iron and calcium, which is due to the catchment area, which is mainly occupied by bogs. Hydrochemical parameters, on average, are the following: pH 4.2-5.5, total hardness 0.08-0.28 mg-eq/l, dissolved oxygen content 12.1-8.8 mg, permanganate acidity 69.8-55.7 mgO/l.